My story is a little bit complicated.

Artists featured in this article

Escaping a country. Losing everything. Creating a new life for his family by never losing touch with his talent. Angel Marquez overcame a lot. But he’s as humble as it gets.

To me, who I am as a person is more important than what I do as an artist. I like to help people and be humble.

Angel’s career began like many others. His parents noticed his talents early on, put him through art school and pushed him to do something with it.

I finished art school in six years and started a career in fine art when I was 17. During that time, I did eight gallery expos and won two awards for paintings and sculptures.

That was a gateway into graphic design.

I finished art school and got a second degree in graphic design, then worked at two of the biggest companies in Venezuela. I worked on magazines, with animation and with media.

But that’s when things took a turn.

The government owned those companies and I saw too much. I didn't want to be a part of it. I felt like I needed to do something else. So my wife and I left, and moved to Margarita Island. That’s when one of my closest friends said, you need to be a tattoo artist.

Money was tight then. Angel got one check from previous work and invested it in his own shop. His wife acted as manager and kept things running. But it didn’t last long. It couldn’t.

In 2005, the Venezuelan government got really bad. We sold everything and got out of there. We lost everything.

It took him and his wife five years to officially sell their condo and move to the states. When they did, they had very little money and only four bags of possessions.

We lost everything. We came to America with 4 bags. We were scared.

But he met people who instantly became friends and who would help them get through the toughest times until they got back on their feet.

They helped me get work and pay my bills. And they told me not to worry, they would keep me in the U.S. I will never forget that.

When he earned his papers and could work, Angel began at Seventh Seas Tattoo Club. It didn’t take long for him to build clientele and get booked up. His nickname, Octopus, followed him.

I earned that nickname when I ran the tattoo shop in Venezuela because people would say I could do a million things at once. The name stuck with me.

The artists at Seventh Seas pushed  him and challenged him to become the artist he is today. He learned very quickly to work hard and stay humble. He now passes this onto his apprentices.

I teach apprentices to be better than me. It’s not about cleaning my chair, but about how to refine your technique. Some apprentices want to tattoo like me, some want to explore other styles. I just teach them to be their best and it makes me proud when they get there.

As for his style, Angel calls it Black and Grey Illustrative Realism.

Black and grey was my thing back in the day. I was following a Venezuelan Realism artist who’s work was so smooth. I began learning that technique and realized I like to do line work. It’s my take on an old school thing.

Some of the pieces he’s proud of include an American Flag half sleeve and a Ship in a Bottle chest piece he did.

The best way I can think of to say ‘thank you’ to Hart & Huntington and the clients who sit in my chair is to do my very best work for them. 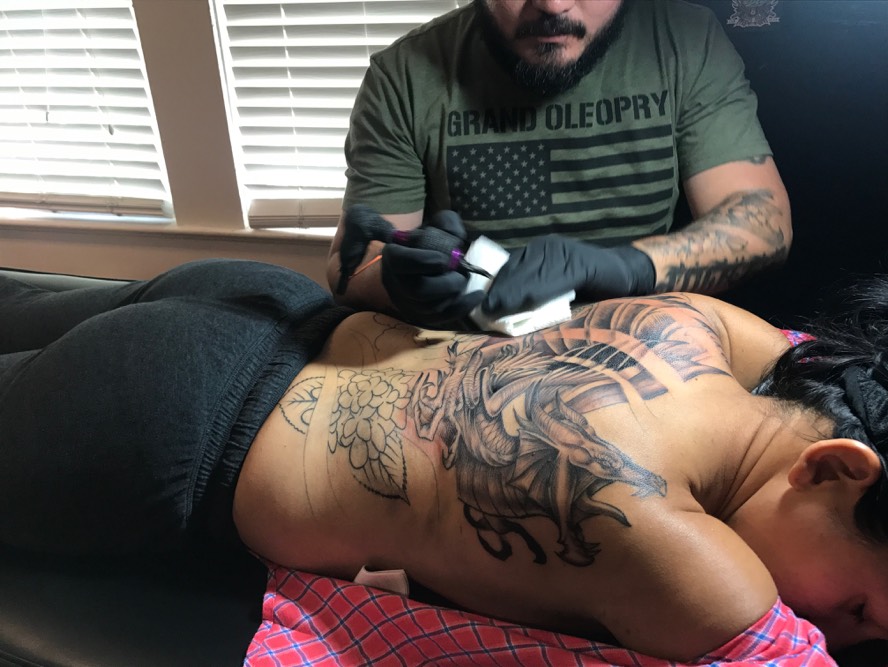 The experience itself is meaningful to Angel, too.

When people sit with me, it’s something so amazing. Every person has a story. Every person has an experience. I like to connect with the client. We talk about so many things. Sometimes, they tell me secrets, things they wouldn’t tell anyone. That’s the kind of stuff that matters.

Some clients even remember the coffee he likes. (White chocolate mocha latte in case you want to bring him one.)

I really appreciate the small stuff.

Hart & Huntington Nashville has been great for his career and his soul. He’s learned a lot from the talented artists there and he’s a part of a family who has each other’s back.

The crew is super fun. It’s similar to my culture. We get each other coffee. We cheer each other on. It makes you feel good. I know I’m in the right place.

Angel’s drive comes from his passion to be a good dad.

I do this for my kids. They deserve the world. Everything I do is to give them the best and to be a good example of a hard worker.

And while there is no denying his talent, tattooing is what he does, not who he is.

My work is my work but myself is a completely different story. Art is my job now. It’s personal. But at the end of the day, I just want to be remembered as a good person. 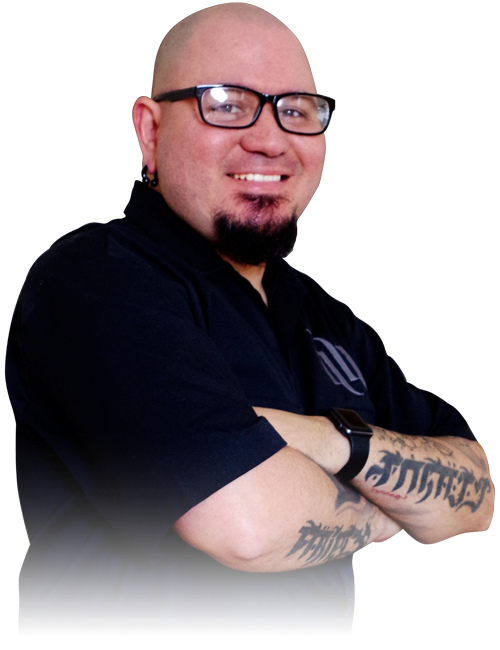 Get a tattoo from Angel Marquez.

Life is what you make of it.

Yasir Nieves has been running the show at H&H in Nashville, Tennessee for roughly two years now, but it already feels like he’s been there for decades. His impact is profound—and intentionally so.
Continue reading

The guts to be great.

For Dustin, there wasn’t a single moment where art entered his life. It was always there. The story is, taking that natural talent and turning it into something incredible. And that journey will never stop.
Continue reading

Celebrate the art of tattoo.

For our latest stories, inspiration, and tattoo advice please subscribe to our email newsletter.

Come fly with us.